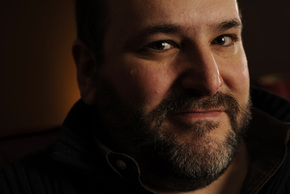 Jacqueline Lawton:  To begin, can you tell me a little bit about where you live (maybe where and what sort of neighborhood)--describe the street where you live--what can you hear if you open a window, what can you see if you look out that window.
Gwydion Suilebhan: I live in a 70 year-old enclave in Silver Spring that happens to be called -- in what might be the most odd juxtaposition of terms in nomenclatural history -- Indian Spring Club Estates.  (Seriously, have four words ever encapsulated the tragedies of American history more succinctly?)  It's a gathering of Tudor-style homes on a quiet street, and my study and library are at the back of the house, so that when I look out my window, I usually see whatever wildlife happens to be congregating in my fenced-in back yard at the moment -- squirrels, mostly, though I have spotted the occasional hummingbird and cardinal.

JL: Then tell me a little bit about your favorite place to write. Do you write in the same place? Or do you write when and wherever the impulse strikes you? Describe your favorite place to write. And do you have any particular writing rituals that you follow?
GS: I write in my head all the time -- when I'm deeply engaged in drafting a new play, in particular, it never leaves me, and I'm almost always mulling over ideas, unless I happen to find myself in a good conversation.  When I start moving from ideas to words, however, I do it in an old leather recliner, a cup of coffee and a heap of papers on the table by my side, my laptop on my lap.  I write first thing in the morning -- I think it's important to give my freshest, most dream-inspired and well-rested brain to my plays.  (The rest of my life can have whatever's left.)  That means I've probably got jazz or classical music playing on the XM radio; lyrics are disruptive to good dialogue.  If I work in the evenings, it's only to edit what I've written -- in which case, I usually listen to classic radio dramas, which I find create a passable form of background white noise in the room.  I'm fairly disciplined, too -- I work almost every day in my most productive periods.  One of my undergraduate professors -- the immensely gifted and not-well-enough-known essayist Joseph Epstein -- once said that if you write 250 words a day, five days a week, in a year you'll have the first draft of a book.  When I heard him say that, I thought... 250 words?  That's nothing.  I can do that.  And he's correct: a little bit of discipline every day yields results.  If you simply wait for inspiration to strike, it never does.  You have to sit your butt down and invite the muse to come.  She still might not accept your invitation, but the more welcome she feels, the more likely she will.

JL: Now, give us a little bit of background where you're from originally, where you grew up, and how you ended up where you are now...
GS: I'm from Baltimore.  I grew up in Pikesville, a largely Jewish suburb on the north side of the city, though I also spent a good deal of time in the Bolton Hill area of the city with my father.  At 17, I joined the carnival... no, really, I actually did, though I left shortly thereafter to go get a degree in poetry from Northwestern.  After Chicago, I wandered a bit -- London for a while, then Boulder -- before I came back home to get a master's degree in poetry from Johns Hopkins.  I've inched steadily away from and back toward the city ever since -- Columbia, Arlington, Capitol Hill, and now Silver Spring -- but it's a bit like orbiting the sun for me: I always feel the tug of its gravity, no matter how far I go.  With my first child on the way, now, too, I'm particularly glad to be close to family... and as a playwright, having what for me is a bottomless source of inspiration nearby is very comforting.

JL: I’m curious, other than being a playwright, what other forms of writing have you done? Were you always drawn to the theater? If so, why? If not, what brought you here?
GS: There isn't a genre of writing, artistic or commercial, that I haven't explored. As I've mentioned, I have two degrees in poetry; I've been tremendously lucky to have studied under some of the greatest poets of the last 50 years, from Robert Pinsky and Richard Howard to Mark Strand and Mary Kinzie.  I taught poetry at the college level for a few years, published a book, served as the poetry editor of a literary magazine -- and ultimately found poetry to be too much like hammering a rusty iron nail into a slab of granite with my head... while only a handful of devotees watched me.  I abandoned the genre without really knowing what I would do next -- knowing only that I simply had to write.  I tried short stories for a while, started (and never finished) a novel, cranked out a full-length screenplay.  I took work as a journalist, writing restaurant reviews and book reviews and straight-up reportage, and I even made a good living for a while writing online curricula for fiction and poetry courses.  But nothing felt right... and I realize now that what I was missing all along was the element of collaboration: the energy I get from working with actors and directors, from the live revision that happens in the rehearsal room, from the minor-but-critical improvisations that happen on the stage, from the immediacy of an audience.  Once I started writing plays, furthermore, so much of my past creative life made sense to me for the first time -- the endless "skits" I'd written with my childhood friends, the hours I spent building sets and running light boards and just plain sitting in the theater when I was in high school and college, the brief foray I made into acting.  I'd been wanting -- even trying -- to be a playwright all along, and as soon as I started letting myself be who I am, I was home.

JL: Describe for me all the sensations you had the first time you had one of your plays produced and you sat in the audience while it was performed...what was different about the characters you created? How much input did you have in the directing of that work?
GS: The very first play I wrote was accepted into a local festival.  This wasn't a full production, but a staged reading -- but for me, this was a big event.  I invited friends and family, got all dressed up, planned a celebratory dinner afterward -- then showed up at the theater for rehearsal to discover that the actor reading the lead wasn't going to be able to make it until five minutes before curtain.  The director would simply read his lines, I was told, during rehearsal.  Being thoroughly naive, I assumed this was standard practice, since nobody else seemed to be worried.  It wasn't until the house was full and the curtain had been held a full ten minutes, however, before the actor finally showed up, by which time I was thoroughly panicked... and my panic became terror a mere two minutes into the reading when the actor in question proved to be both functionally illiterate -- the worst cold reader I've ever heard -- and abominably mis-cast for the role.  I literally wanted to stand up and stop the reading immediately -- and if the same thing happened today, I would.  Instead, I sat in the back row with my head in my hands for the most miserable two hours of my whole creative life.

By contrast, the same play -- which subsequently won an award, had a very productive workshop, and enjoyed two successful readings -- was produced a few months later, and my experience couldn't have been any more different.  I sat in the audience and literally watched my words, my inner life, become gradually more manifest outside of me until they no longer seemed like mine, but something completely other, something I could respond to as well as any other audience member, and I ended up spending the last few moments of the last scene with warm tears of gratitude rolling down my cheeks.  I literally felt like thanking every single person who helped make that evening possible -- the cast, the crew, the director, the other audience members, the masons who built the walls of the theater, the people who had inspired the story in the first place -- all at the same time.

JL: What inspires you to write?  What do you hope to convey in the plays that you write--what are they about? What sorts of people, situation, circumstances, do you like to write about?
GS: I'm a member of a community.  The role I play in that community is storyteller.  I tell the stories that I think my community needs to hear.  (In that regard, I'm a great believer in the idea that the best theater is, or should be, community theater, though the stories that are told in what passes for community theater are sadly not community-centric at all.)  I write because I owe my fair share to the grand human endeavor in which we all participate.  I write because I don't want to take more out of the communal pool than I put into it, and writing is all I have to put into it.  I write, in other words, to be of service.

I offer my community stories because stories help us construct meaning in what often seems like (and probably is) an inherently meaningless existence.  I offer stories because unless we have a regular influx of new narratives, we continue to revisit and eventually become enslaved to the old ones.  New narratives give us new ways of thinking and seeing -- and we desperately need new ways of thinking and seeing.  Of late, the stories that have inspired me the most have centered around humanity's painfully slow accommodation to the great advancements of science in the last 150 years.  We are still discovering what it means to be human and to live in human societies in a world in which things like evolution and the big bang and chaos theory and game theory have eviscerated most of our core religiously-founded beliefs.  Stories -- the right stories -- are the only things that can help us make that transition.

I want to write plays, furthermore, that reflect the diverse lives of the people I live among -- that's also part of being of service.  My plays may come from inside of me, but they aren't only for me.  As a result, the characters I create have always been demographically diverse.  How could they be otherwise, really, if you live in a diverse city like mine?  As a writer, my head is filled up every day with the voices of the people all around me.  Those are the voices I rely on when I work -- the rhythms of speech, the grammar.  I could no more shut them out of my stories than I could blot out the sun... and I don't want to.