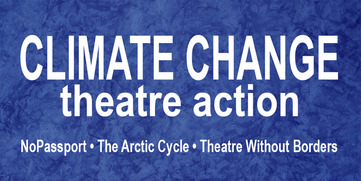 Jacqueline E. Lawton, Neil LaBute, Arthur Kopit, Bryony Lavery, Deborah Laufer, Ryan McCurdy of Broadway’s ONCE, and Heather Woodbury join CLIMATE CHANGE THEATRE ACTION– a series of worldwide readings and performances intended to bring awareness to, and foster discussion around, climate change during the months of November and December 2015. A joint venture between NoPassport, The Arctic Cycle and Theatre Without Borders, this action is in support of the United Nations 2015 Paris Climate Conference (COP21) taking place November 30-December 11, 2015.

The main goal of the project is to invite as many people as possible, who may not otherwise pay attention to this history-in-the-making event, to participate in a global conversation. Modeled on previous NoPassport theatre actions focused on gun control and the aftermath of the Deepwater Horizon BP oil spill, CCTA draws on the expertise and resources of local artists, while being global in scope and uniting multiple countries and culture around a common issue. As Elaine Avila, one of the co-organizers, notes, “Coming together to tell stories is one of the best ways we have to organize and educate ourselves, to feel and to understand.”
A collection of 1-5 minute plays, poems and songs by 50 writers from all six livable continents, curated by Caridad Svich (playwright, 2012 OBIE for Lifetime Achievement & NoPassport), Chantal Bilodeau (playwright, recipient Woodward International Playwriting Prize & The Arctic Cycle) and Elaine Avila (playwright, recipient Disquiet International Literary Program Playwriting Award & Theatre Without Borders), has been made available to collaborators worldwide. To date, over 70 collaborators have committed to hosting events, ranging from readings in classrooms to day-long festivals, from films and radio programs to site-specific performances by glaciers.
"This artivist action on climate change is an opportunity to reflect, with multiple communities, on of the most vital issues on the planet, continuing our mission toward a theatre that can illuminate the relationship between humans and nature,” says Caridad Svich.
Powered by