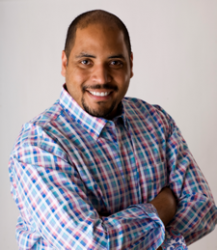 Artistic Associate and Dramaturg Jacqueline Lawton recently had a conversation with Michael J. Bobbit, Artistic Director of Adventure Theater and playwright of Mirandy and Brother Wind, which is being produced in collaboration with African Continuum Theatre Company. Performances run at Glen Echo Park from January 21 to February 13, 2011 and at the Atlas Performing Arts Center from February 25 to March 13, 2011. Here’s part one of their talk.

Jacqueline Lawton: So, to begin can you tell me a little bit about where you live (maybe where and what sort of neighborhood)--describe the street where you live--what can you hear if you open a window, what can you see if you look out that window.
Michael J. Bobbitt: I live in Glen Echo, very close to Adventure Theatre in Glen Echo Park.  I enjoy a treacherous block commute to work every day.  It's a very small town with 105 homes.  Everyone knows everyone.  Many of the homes are historic, over 100 years old and a few were built in the 50-60's.  We have a mayor and a town hall.  It's lovely and quiet and safe.  My street ends at the Cabin John Parkway, so behind my house is the Potomac River.  In the Fall, I enjoy beautiful views of the Potomac and the most gorgeous sunset in the afternoons.  When I open my window, I hear cars on the parkway, but they sound very similar to the ocean, and lots of birds.

JL: Next, tell me a little bit about your favorite place to write. Do you write in the same place or in different places? Describe your favorite place.
MJB: I write, laying on the couch in my family room.  It has lots of large windows and doors, so I can look out at the trees.  Occasionally, I'll write at work.

JL: Now, give us a little background on where you're from originally, where you grew up, how you ended up where you are now...
MJB: Born and raised in DC, near Howard University, I went to DC public schools until 9th grade, when I went to Gonzaga College Preparatory High School.  At Gonzaga, the whole world opened up.  I quickly learned about other cultures and life outside of a small neighborhood.  I started singing and playing the trumpet at age 8 and planned on being a musician.  Even at Gonzaga, I was a serious musician and went to college on a music scholarship.  Once I got there, I really missed theatre and realized that theatre was my biggest love.  I did a bunch of training at various certificate programs, like The Dance Theatre of Harlem, The American Musical and Dramatic Academy and Cap 21.  In college, I was a creative writing minor.  After spending quite a bit of time performing, touring and doing regional theatre, I came back to DC.  I fell in love and adopted my son from Vietnam and realized that performing wasn't as easy, because I didn't get to see my family enough.  So, I started focusing on choreographing and directing and teaching.  Oddly enough, even though I always had work, it wasn't enough and stated cramming and studying and learning everything I could about Theatre Management and then, Adventure Theatre came my way.

JL: In addition to being a playwright, you are also the Artistic Director of Adventure Theater. How on earth do you manage to balance the responsibilities of each?
MJB: I don't.  So much of my time as an artistic director is spent doing non-artistic stuff.  I spend nearly 1/2 of my week out in the community trying to drum up support and get people to know about AT, so every chance I get to write is welcome.

JL: What is it about writing plays that draws you ... as opposed to writing poetry, songs, or fiction?
MJB: I only write musicals that are the culmination of poetry, songs and fiction, which is awesome.  I love the idea that what I write will come to life and breathe and showcase (and rely) on the talents of others.  It's pretty thrilling.

JL: Describe for me all the sensations you had the first time you had one of your plays produced and you sat in the audience while it was performed...what was different about the characters you created? How much input did you have in the directing of that work?
MJB: Nervousness, confidence, frustration, pure joy.  It's everything.  I am one of those playwrights that really enjoys hearing what other people bring to the plays.  I learn a lot more about the characters.  So, in those instances, when something is different from what I intended, I love it. It's a chance to clarify my intention and get more specific.  One of my instructors told me, the best writing is when you can take the choices away from the actors and diretors.  That's clear, that's specific.  I've been fortunate enough to have been involved in al of the productions of plays that I have written.

JL: Who or what inspires you to write and create theater?
MJB: In my writing, I am inspired by the stories of black people.  Every single show I've written is based on African American culture.  We have so many.  I try to write plays where race is not a plot point, but culture is at the center of the world.  Inspiration smacks me in the face every single day.  I see theatre everywhere.

JL: What do you hope to convey in the plays that you create--what are they about? What sorts of people, situation, circumstances, do you like to write about?
MJB: Truly, it's African American culture.  I try to write plays that are steeped in the culture but are universal in its emotion.  Stories about everyone.  The stories about small people that have huge events happening around them, really gets me going.  One of my plays is about THE YELLOW ROSE OF TEXAS.  A mulatto indentured servant, who is said to be the reason why the Mexican President lost the Texas Mexican revolution.  That's a huge event happening to a small person.