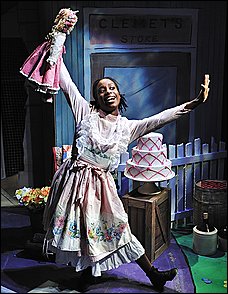 Jacqueline Lawton: Mirandy and Brother Wind, adapted from the children’s book written by Patricia McKissack, is about a young girl who has a really big adventure and learns something special about freedom and kindness. What compelled you to write this play?
Michael J. Bobbitt: Several things.  As an artist who loves musical theatre, the story already had music and dance and fantasy written into the story.  For me, the best musicals are those that have those elements already present – it becomes less forced.  The second reason, as a producer, there is a serious dearth of African American children’s works.  So, Adventure Theatre has decided to lead, by commissioning 5 new African American Children’s Musicals.  Next up: THE SNOWY DAY.  Also, as an artist, the story is steep in African American Culture, but it’s a universal story and not about race.

JL: Mirandy and Brother Wind is set in 1906 in South Carolina. Why do you feel this story is relevant today?
MJB: I think, even though the civil rights movement ended on a half a century ago, our kids aren’t as aware of the movement for equality and freedom.  I’m glad that those issues are starting to become a thing of the past.  I’m glad that we are talking instead of diversification and inclusion. Elsewhere, in the world, it’s not the same. Also, with the presence of the bullying epidemic, friendship and kindness and always be reiterated!  I think Mirandy’s story will always be present.  There are so many lessons in Mirandy, that at any time, the main lesson can become about whatever is most relevant.

JL: That’s great! I completely agree. When parents and children leave the theater, what do you hope they walk away thinking about or talking about after they see Mirandy and Brother Wind?
MJB: A lot.  Freedom, fun, dancing, friendships, stories, culture, history and love.

JL: The characters in Mirandy and Brother Wind are wonderful, vivacious, and truly unique! Which aspect of Mirandy’s character do you most relate to? What aspect of Ezel’s character do you most relate to? Then, of course, there’s Grandma Beasley, whose wisdom, sass, and no-nonsense attitude are sure to steal the show! Do you see yourself in her at all?
MJB: With Mirandy, it’s her tenacity. She says what is on her mind at that moment because of her ambition.  She’s a pretty cool girl and I’ll bet she grew up to be an amazing woman who contributed heavily to society and the civil rights movement. With Ezel, it’s his desire to please and his clumsiness.  I spent so much of my childhood in casts.  LOL.  With Grandma Beasley, well, she’is my mom and grandma rolled up into one.  Do I see myself in her…yes, probably when foolishness surrounds me.  I’m really resilient though.

JL:  What was the most challenging part of adapting Mirandy and Brother Wind into a play? Which character’s voice or situation was the most difficult to capture?
MJB: Making sure that there were not too many themes AND making sure the lessons’ were present but not preachy.  I’ve learned that kids will listen and they will learn.  Too often in Children’s theatre plays focus too much on the lessons and teaching, to the detriment of good playwriting an entertainment.  Also, as always, my dirty little secret is making sure that there is a marriage between entertaining kids and their parents.  The parents, after all are buying the tickets.

Also, Mirandy’s voice was the most difficult. She’s precocious and maybe on the edge of sassy.  I know that our fantastic actress will bring out the good parts of those two characteristics, but I’m a little afraid of how she’ll be interpreted at other theatres.  So, I’m eagerly awaiting the rehearsal period to make sure that we get it right.  Brother Wind was also a challenge.  He’s a fictional creature that doesn’t have a lot of history in McKissack’s Book.  In many ways it was fun to create his story, but it was a challenge.

JL: Mirandy and Brother Wind is a brand new play and you’ve gone through a lengthy development period. What has that process been like? What surprised (continues to surprise you) you about the script?
MJB: The process was great.  My collaborator, John Cornelius and I have been writing for nearly 15 years together.  We are a great team and he and I just know…!  There was never a hard moment in creating the piece.  Additionally, so many people have offered great suggestions.  The thing that most surprises me is people’s response.  I know what I love and what entertains me, but one never knows how others will react.  It’s so great to hear people laugh at the things that were funny in my head or be moved by the moments that give me chills or be entertained by the excitement that I see in my head.

JL: With a musical, you’re not only working to develop the text, but you are also collaborating with a composer to write songs and create music. The songs in this play not only convey characters hopes, worries, and desires, but they also set up the world of the play. Can you talk about this collaborative process?
MJB: John and I usually talk and talk and talk about the style, the tone, the goal before either of us writes down a thing.  Then, I do a synopsis, with a scene by scene breakdown.  Then, we break down the scenes into events or moments.  John and I will quibble over the events, making sure that they are special or can be made special (we don’t believe in pedestrian moments onstage.)  Then, once we are happy with the event break down, I write and write and write.  Sometime when I get to a song moment, I will just write poetry or a monologue.  John has the uncanny ability to know exactly where and when the character should sing.  He picks up on the tempo of the scene, that drives him to the song, and sometimes, he’ll latch onto a phrase that I wrote, and it’ll be the catalyst for a song.  Once we get the scene and the songs drafted, he and I just start nipping and tucking. It’s seamless, and it’s exciting.

JL: In addition to the songs, the element of dance is very important in this play, especially the cakewalk. When writing the script, how did you determine when the dance numbers would happen?
MJB: Some of the dances are driven by the plot. The final scene is all about the actual cakewalk dance. At other times, I believe that characters speak until the emotion takes over and then they have to sing out their emotions and sometimes the emotion is so overwhelming that they have no choice but to dance. Also, dance is such a great spectacle, that I squeezed it in as much as I could.

JL: What next for you as a writer?
MJB: Oh goodness. Not sure. John and I have been talking about looking at some of the grim brothers and resetting them in African American cultures. Also, I happened upon the story of Izzy and Moe, two prohibition agents that used vaudeville techniques to catch criminals. Sounds like a musical!