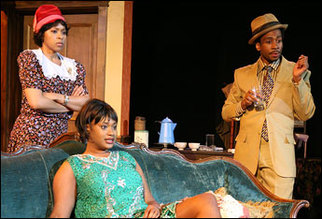 Here’s the conclusion of Artistic Associate and Dramaturg Jacqueline Lawton conversation with BLUES FOR AN ALABAMA SKY playwright Pearl Cleage.

Jacqueline Lawton: What compelled you to write BLUES FOR AN ALABAMA SKY?
Pearl Cleage: My husband and I had just attended a production of my play “Flyin’ West” at the Alabama Shakespeare Festival in Montgomery, Alabama. The day I was scheduled to give a short presentation and engage the audience in some Q&A, happened to be the day the Ku Klux Klan was marching around the state capital a few miles away to protest the Martin Luther King, Jr., national holiday. I didn’t know whether to laugh or cry, and as I recall, did a little bit of both. Later that night, we were driving back to Atlanta through the Alabama night and the sky was full of the kind of bright stars you never see in the city. It was so beautiful, I opened the window and hung my head out to see as much of that sky as I could and I found myself wondering what it would be like to leave a place where you could see the sky like this and journey to New York City, where neon lights often trump star light from our vantage point in the middle of all those skyscrapers. I thought how much a person might miss that sky. That was the beginning of the idea that grew into “Blues for an Alabama Sky.”

JL: BLUES FOR AN ALABAMA SKY is during the summer of 1930 in Harlem, New York. Why do you feel this story is relevant today?
PC: The story is set in 1930, but it isn’t about 1930. It’s about truth and honor and love and fear and friendship, topics which don’t grow old. Writers are always writing about the complexities of being human. Time and place are merely the specific backdrops in which we chose to place our explorations. If we get it right about the people, the question of relevance is moot.

JL: The characters in BLUES FOR AN ALABAMA SKY are so vividly and honestly drawn. Which aspect of Angels’ character do you most relate to? What aspect of Delia’s character do you most relate to? Then, of course, there’s Leland, whose passion, sadness, and religious morals serve as a catalyst for this play. Do you see yourself in him at all?
PC: I love Delia for her idealism and her passionate commitment to women’s health and wellness. I also love her for her innocence. I think she would be a good friend. I would also like to hang out with Doc and with Guy. Angel, on the other hand, is someone from whom I would run as fast as I could. She is a great character to write about, but I don’t think she’d be a good person to know. The same holds true for Leland. I understand how he was raised, but his willingness to condemn people for who they are, makes him narrow minded and judgmental. I don’t need to see myself in my characters to write them well and truly. I need to be sure I figure out the essential parts of who they are, what they need, what they’re afraid of, what they want enough to sacrifice everything to get it. I don’t have to like them, but I have to understand and not judge them if I’m going to make them come alive for the audience. When “Blues” was first produced at the Alliance Theatre, some of my students from Spelman were disappointed because I didn’t find a way to “forgive” Angel and let her go to Paris with her friends. We had some interesting conversation about consequences.

JL: What was the most challenging part of writing BLUES FOR AN ALABAMA SKY? Which character’s voice or situation was the most difficult to capture?
PC: I don’t think about the process in discreet parts that are “harder” or “easier.” The whole process is one journey for me and all of it is challenging in different ways. I do a lot of character work early in the play’s development so their voices evolve over time. By the time I’m ready to begin “Act One, Scene One,” I’ve been talking to these folks for months! The most painful moment to me is always Doc’s death. I wanted him and Delia to have more time to love each other.

JL: BLUES FOR AN ALABAMA SKY was commissioned and received its World Premier at the Alliance Theatre Company in Atlanta, Georgia. It has seen many successful production ever since. What surprises about this play? Whether it’s the audience’s response or your own when you watch it?
PC: I don’t know if I can answer a question about what “surprises” about the play. The audiences are always different, which is true for any play, but what surprises them, I couldn’t tell you that. I’ve very grateful that people have found something in the play for so many years following that first production. I find that when I see it, I respond to different scenes at different times. Sometimes I love the very beginning where we see the love Guy has for Angel, sometimes I love Angel sitting in that window seducing Leland, or singing “St. Louis Blues” for Doc. Sometimes I wait for the moment when Doc and Delia first get together, or when Guy finally hears from Josephine. I’m always happy to see this play. It’s like meeting old friends again.

JL: One of the key issues in BLUES FOR AN ALABAMA SKY is the establishment of family planning clinics in Harlem. As Planned Parenthood struggles to maintain federal funding, this issue of family planning and health services for women remains under political and social attack. What are your thoughts on this?
PC: I think reproductive health and birth control are issues that must always and only be determined between a woman and her doctor. I am a supporter of Planned Parenthood and of a woman’s right to decide when or if she will become a mother. I think attempts to insert one person’s religious opinions into the decisions of others are wrong. A friend of mine died from an illegal abortion during my freshman year at Howard University in 1966 because she was so afraid to tell her mother she was pregnant that she had an illegal abortion and bled to death in her lover’s apartment. This story is not unique and many women of my generation have such memories. Women will always try to terminate unwanted pregnancies. The question is whether those terminations will be safe and legal or whether these women will be at the mercy of back alley abortionists.

JL: What next for you as a writer?
PC: I am at work on a new play, as yet untitled, commissioned by the Alliance Theatre for a 2012 production. I have a novel coming out in May entitled, JUST WANNA TESTIFY. I’m also in the process of discussing future production of my 2010 play, THE NACIREMA SOCIETY REQUESTS THE HONOR OF YOUR PRESENCE AT A CELEBRATION OF THEIR FIRST ONE HUNDRED YEARS with several interested theaters. I think this is an exciting time to be an American writer and I look forward to continuing to add my creative voice to the national dialogue!