PlayMakers Repertory Company and The Process Series proudly present “Making Tracks,” a new play reading series tackling some of the most prominent issues of our time. Dedicated to representing a wide variety of perspectives, “Making Tracks” will feature readings of four plays by four vastly different voices: a UNC student playwright, a faculty playwright, a national playwright, and an international playwright. The series will run from the afternoon of April 13 to the evening of April 15, in conjunction with “Leaving Eden,” the world-premiere of PlayMakers’ first full commission, originally developed in partnership with The Process Series.

“PlayMakers aims to become a creative home for the development of playwrights’ most socially conscious and ambitious work,” says PlayMakers’ Producing Artistic Director, Vivienne Benesch. “‘Making Tracks’ is a new platform that gives us that opportunity and this inaugural year provides a great taste of the exciting range of voices and stories that we can expect to see. I am thrilled to be collaborating once again with the invaluable Process Series, whose ten-year track record developing significant work for the performing arts provides a great launching pad.”

"I'm honored to have Noms de Guerre" as part of the inaugural  "Making Tracks" reading series," says playwright Jacqueline E. Lawton. "As the child of veterans, I am drawn to the impact of war on our service men and women, their families and their communities. As a citizen of the United States, I am conscious of the work that must be done to care these brave individuals on their return from the front. Not enough is done for them and I want that to change. My hope is that this play will be a part of a longer conversation about how we do better for these honorable people who sacrifice so much and risk their lives for our freedom and protection."

About The Process Series
Dedicated to the development of new and significant works in the performing arts, The Process Series features professionally mounted, developmental presentations of new works in progress. The mission of the Series is to illuminate the ways in which artistic ideas take form, to examine the creative process, to offer audiences the opportunity to follow artists and performers as they explore and discover and by so doing to enrich the development process for artists with the ultimate goal of better art and a closer relationship between artists and audiences.

About PlayMakers Repertory Company:
PlayMakers is the professional theater in residence at the University of North Carolina at Chapel Hill, and North Carolina’s premier resident theater company for more than 40 years. We produce relevant and courageous work that tells stories from and for a multiplicity of perspectives and creates transformational impact in our immediate and extended communities. Developing new work is central to our mission. PlayMakers has been named one of the “best regional theatres in America.” 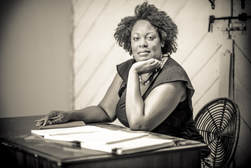 ​JACQUELINE E. LAWTON was named one of 30 of the nation's leading black playwrights by Arena Stage’s American Voices New Play Institute. Her plays include: Anna K; Blood-bound and Tongue-tied; Deep Belly Beautiful;The Devil’s Sweet Water; The Hampton Years; Intelligence, The Inferior Sex, Ira Aldridge: the African Roscius; Lions of Industry, Mothers of Invention; Love Brothers Serenade (2013 semi-finalist for the Eugene O’Neill Theater Center’s National Playwrights Conference); Mad Breed; Noms de Guerre; and Our Man Beverly Snow. Ms. Lawton received her MFA in Playwriting from the University of Texas at Austin, where she was a James A. Michener Fellow. She is a 2012 TCG Young Leaders of Color award recipient, National New Play Network (NNPN) Playwright Alum, and member of Arena Stage's Playwrights' Arena. She is also a proud member of the Dramatist Guild of America.
Powered by