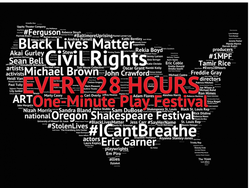 ​The Oregon Shakespeare Festival (OSF) and The One-Minute Play Festival (#1MPF) are teaming up to co-produce Every 28 Hours, a national partnership focused on the widely shared and contested statistic that a black person is killed by the police every 28 hours in the United States. The Every 28 Hours plays will consist of 60-plus one-minute plays inspired by the Black Lives Matter movement, with participation by playwrights and theaters across the nation.

Created under the leadership of Claudia Alick (OSF’s associate producer, community) and Dominic D’Andrea (producing artistic director, The One-Minute Play Festival), in association with local St. Louis theater maker and producer Jacqueline Thompson (assistant professor of acting and directing, University of Missouri-St. Louis), the first phase of the project includes community meetings, collaborative writing sessions and readings of the plays in St. Louis County, October 20-24, 2015. Readings will be produced Oct. 24 at two locations: the Dellwood Community Center in Ferguson, Missouri at 2:00 p.m., and the Kranzberg Arts Center in St. Louis at 8:00 p.m.

“The Every 28 Hours Plays calls attention to acts of injustice happening in this country," Lawton said. "These plays demand action, empathy, and accountability. We need more voices in the American Theatre. We need more stories that reflect humanity.  I was honored to take part in the work."

“The Every 28 Hours Plays is an exciting and necessary project to be doing at this place and time,” D’Andrea said. “The deep injustices that marginalized populations face in this country are staggering—and no place better represents this tension than in Ferguson. As artists we felt it was our responsibility to create an artistic space to respond to questions of race, injustice, and civic responsibility on a local and national platform.”
"Ferguson is the heartbeat of the movement,” Thompson said. “This project is a brilliant creative conduit to share its pulse with the world.”
“We are in a time of change for the U.S.,” Alick said, “and the reflection on this current Civil Rights Movement is exciting because of the power and number of talented voices collaborating. Our project is informed by thoughtful leaders in activism, performance, civic leadership and communications. The work is hard and inspiring and necessary.”

The One-­Minute Play Festival (#1MPF) is the nation’s largest and longest running grass roots theatre festival company, founded by Dominic D’Andrea. #1MPF is social barometer project that investigates the zeitgeist of different communities and populations through dialogue, consensus building and a performance of moments generated by each community.
​

Founded by Angus Bowmer in 1935 and winner of a 1983 Tony Award for outstanding achievement in regional theatre, the Oregon Shakespeare Festival presents an eight-month season of 11 plays that include works by Shakespeare as well as a mix of classics, musicals, and new works. The Festival also draws attendance of more than 400,000 to almost 800 performances every year and employs approximately 575 theatre professionals. In 2008, OSF launchedAmerican Revolutions: the United States History Cycle, a 10-year cycle of commissioning new plays that has already resulted in several OSF commissions finding success nationwide.
Powered by