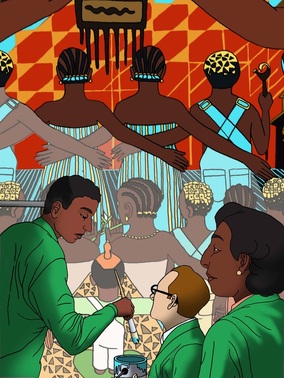 On Monday, September 3rd at 3:00pm, Theater J will present a staged reading of THE HAMPTON YEARS by Jacqueline E. Lawton as part of the Kennedy Center's 11th Annual Page-to-Stage Festival.

The reading will take place at Millennium Stage North and run for approximately 2 hours.  THE HAMPTON YEARS is rated PG and is recommended for teenagers and adults.

This breakthrough premiere explores the development of great African-American artists, John Biggers and Samella Lewis under the tutelage of Austrian Jewish refugee painter and educator, Viktor Lowenfeld. Focusing on the pivotal years at Hampton Institute, Virginia during WWII, this richly researched tapestry reveals the dreams and travails of young artists in a still segregated society.

Set at Hampton University from 1939 to 1946, The Hampton Years examines the impact of World War II on Jewish immigrants living in the United States and their role in shaping the lives and careers of African American students in the segregated south. Viktor Lowenfeld joined the Hampton Institute in Virginia in 1939 as assistant professor of Industrial Arts and studio art teacher. He was later appointed as Chairman of the Art Department and in 1945, he was named curator of the distinguished collection of Black African Art at the Hampton Institute. Burgeoning artists, John Biggers and Samella Lewis. were his students and acclaimed artists, Elizabeth Catlett and Charles White, taught in residence. While it certainly a difficult time for both African Americans and Jews as Jim Crow laws and Anti-Semitism plagued the country, somehow these passionate and brilliant artists rose above all that was standing in their way to create beautiful, poignant, and lasting works of art. The Hampton Years celebrates the legacy of these outstanding artists and honors the stewardship of their great work. 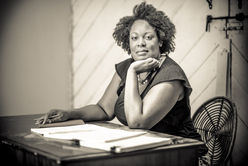 JACQUELINE E. LAWTON received her MFA in Playwriting from the University of Texas at Austin (Hook 'em Horns!), where she was a James A. Michener Fellow. She participated in the Kennedy Center’s Playwrights’ Intensive (2002) and World Interplay (2003).  She is the author of Anna K; Blood-bound and Tongue-tied; Deep Belly Beautiful; The Devil’s Sweet Water; Ira Aldridge: the African Roscius; Lions of Industry, Mothers of Invention; Love Brothers Serenade, and Mad Breed.  Lawton’s work has been developed and presented at the following venues: Active Cultures, Classical Theater of Harlem, Folger Shakespeare Library, theHegira, Howard University, Kennedy Center’s Page to Stage Festival, Rorschach Theater Company, Savannah Black Heritage Festival (Armstrong Atlantic State University), Shakespeare Theatre Company, Source Theatre Festival, Theater J, and Woolly Mammoth Theater Company. She is published in Experiments in a Jazz Aesthetic: Art, Activism, Academia, and the Austin Project (University of Texas Press). Lawton is a 2012 TCG Nathan Cummings Young Leaders of Color award recipient. She has been nominated for the Wendy Wasserstein Prize and a PONY Fellowship from the Lark New Play Development Center. She was named one of 30 of the nation's leading black playwrights by Arena Stage’s American Voices New Play Institute. Since 2010, Lawton has served on Round House Theatre's Artists' Roundtable. She is the recipient of numerous awards and fellowships including two Young Artist Program Grants from the DC Commission on the Arts and Humanities for Playwriting. She resides in Washington, D.C. 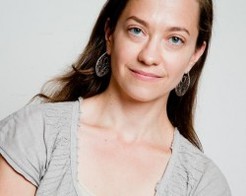 SHIRLEY SEROTSKY is the Director of Literary and Public Programs at Theater J, where she directed the 2010 production of Mikveh, the 2009 production of The Rise and Fall of Annie Hall (which received a 2009 Helen Hayes Nomination for Best New Play), and the 2011 production of The History of Invulnerability. She began her theater education as a performance major in the musical theater program at the University of Michigan, but soon detoured into directing which she studied at the North Carolina School of the Arts. After graduation she moved to New York, where she worked at the Women’s Project and Productions; interned for the Cherry Lane Theater; and was employed as an editorial assistant for a Jewish organization. In August 2001 she moved to Washington, DC to fulfill a nine-month Kenan Fellowship at the John F. Kennedy Center for the Arts. There she worked as an assistant director and dramaturg on several productions. Since 2002 she has worked as a freelance director and dramaturg in the Washington, DC area and beyond, directing for the Source Festival, Theater Alliance, Catalyst Theater, Rorschach Theater, Catholic University, the National Conservatory of Dramatic Arts, Journeymen Theater, and on several out-of-town productions, including at the Humana Festival of New Plays at Actors Theater of Louisville. She has taught young people and adults at The Actor’s Center, the Musical Theater Center, and Theater Lab. She co-founded Bouncing Ball Theatrical Productions with Shawn Northrip (which aims to develop and produce new and innovative musical theater works). Training: BFA, North Carolina School of the Arts. Member of The 2002 Designer/Director Workshop with Ming Cho Lee and the 2003 Lincoln Center Director's Lab. 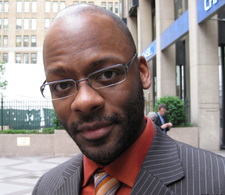 OTIS CORTEZ RAMSEY-ZOE is a Lecturer of Theatre Arts at Howard University, Future Classics Program Coordinator at The Classical Theatre of Harlem, Series Editor for NoPassport Press’s Dreaming the Americas Series, a freelance dramaturg, and a Company Member of banished? productions. He has developed new works with such organizations as The Sundance Institute, Kennedy Center, Arena Stage, Centerstage and Black Women Playwrights’ Group and by such writers as Colman Domingo, Tarell McCraney, Noah Haidle, Kirsten Greenidge and Tim Acito. He has directed readings including Jacqueline E. Lawton’s The Hampton Years and Blood-bound and Tongue-tied, James Webb’s The Contract and David Emerson Toney’s Kingdom. Previously, he was Literary Manager and First Look Coordinator at Centerstage and an Allen Lee Hughes Dramaturgy and Literary Senior Fellow at Arena Stage. Mr. Ramsey-Zöe holds degrees from New York University and the University of Notre Dame.